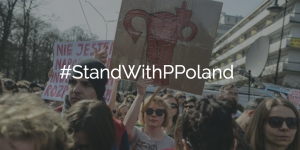 The Conservative Law & Justice Party (and written in Polish their acronym is PiS —> ahahahaha —> that’s real —> The PIS Party —> what a great example of onomatopoeia) who took control of Parliament in October wants to issue a ban on all abortions. The Prime Minister is voicing support for this ban as well.

PiS says they are following the laws of Catholic Church, protecting life from conception to death —WITH THE OBVIOUS EXCEPTION OF WHEN THAT LIFE IS A WOMAN.

In Poland (since the 1990s) women have been able to obtain abortions (in the early stages of pregnancy) for one of three reasons: if the fetus isn’t viable or has a severe disability, if the pregnancy is resulting from a crime (like rape or incest) or if the mother’s health/life is at risk. Poland is considered to already have some of the strictest abortion laws in the EU. The Pis party wants to go all in.

This would mean that women couldn’t obtain abortions if they were raped, if they were going to die from the pregnancy, if the fetus wasn’t viable. WHAT KIND OF CRAZY TORTURE IS THIS?! Here is a great example of “punishing women” —> for being women.

Of course people will not stop getting abortions, just that the women being forced to get underground abortions will multiply. Currently in Poland there are only hundreds of legal abortions on the books a year; we can only image the thousands and thousands being obtained illegally and unsafely. Talk about protecting life! We’ve said it before and we will say it again —- way to embody compassion Christians.

THE GOOD NEWS IS on Sunday thousands of protestors took to the streets of Warsaw to voice their NO FUCKING WAYs. Women (and men) are coming together and letting their opinions be heard. They are rallying. We support you women of Poland! And hey women of America, maybe we need to borrow a page from Poland’s book and take to the streets because we aren’t that far off.