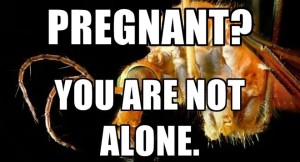 If you want a glimpse into the kind of potential nightmare that anti-abortion crusaders are plunging this country into, take a look at what is happening with the rapidly spreading Zika epidemic in Latin America. The blueprint for the theocratic regime that misogynistic holy rollers want to impose on the US is being played out right now in the slums and poor villages of the Third World.

The mosquito-borne Zika virus has relatively mild symptoms for most people, but is linked to severe brain damage among newborns. It’s so bad that governments in the region are telling women to avoid having children for the next couple of years. But the problem is that the countries affected have the world’s most stringent anti-abortion laws outside of Vatican City… or Texas.

They don’t even allow for abortion in cases of fetal anomaly (or for rape, which is another epidemic–1.6 million women a year are raped in the region.) Contraceptives are difficult if not impossible to obtain. So the admonition to “avoid pregnancy” is about as meaningful as purity rings.

There is a glimmer of light–Latin American abortion-rights advocates are pushing for laws to at least permit abortions due to fetal anomalies. It wouldn’t be the first time that an epidemic that caused fetal deformities knocked some common sense into a society. In the 1960’s–when abortion was illegal in the US–rubella outbreaks caused thousands of birth defects, shining a light on the real life impact of harsh abortion restrictions. The ensuing discussion helped lead to Roe v. Wade a decade later.
With a similar scenario playing out with zika, the US can serve as an example for abortion rights for women in Latin America… or the plight of those women can serve as a grim augury of the repressive and regressive society that abortion opponents want to impose here. The choice is yours… for now.