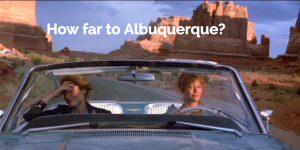 If you’ve ever had an asshole neighbor, you know that the turmoil they cause doesn’t stop at the property line. Their barking dogs, abandoned vehicles, and drunken brawls disrupt everyone around them. Asshole states with harmful anti-abortion TRAP laws have a similar effect on their neighboring states. Just ask poor New Mexico.

New Mexico has some of the most sane and practical policies toward abortion rights in the nation–so much so that the anti-abortion group, Americans United for Life, ranked it the 10th worst state for abortion laws… which makes it 10th best back in the real world.

But those dickweed neighbors–in this case, Arizona, Oklahoma, and especially now Texas–are ruining the quality of life in the whole region with their crazy TRAP laws. The result is that New Mexico has become what some call an “Abortion Magnet.” We prefer the term “Oasis of Sanity.”

In any case, abortions for New Mexico residents are way down, but the number of abortions for out-of-state women has doubled since 2013. Nearly 20 percent of the abortions performed in New Mexico in 2014 were for women from out of state. And things have only gotten worse since the draconian new Texas TRAP laws have taken their toll.

Texas women had almost 9,000 fewer abortions in the first year since those TRAP laws took effect. Well guess what? Those unwanted pregnancies didn’t just go away. They went to back alleys and to home abortion remedies, and a lot of them ended up going across state lines. New Mexico has become a virtual refugee destination for Texas women fleeing the oppressive conservative regime.
This country shouldn’t be a patchwork of free states and states that deny women their rights. We’re all only as free as the women of Texas. Freedom shouldn’t require interstate travel.