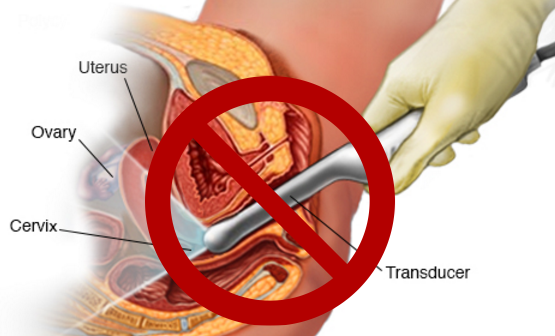 Restrictive abortion laws that mandate ultrasounds are just as bad–and just as unconstitutional–as the TRAP laws that the Supreme Court shot down in Whole Woman’s Health v Hellerstedt.

In the Whole Woman’s Health case, the Justices determined that the TRAP laws in Texas were about restricting a woman’s right to choose and clearly NOT about safeguarding women’s health, as their proponents claimed. As a great new article in Rewire points out, the same legal reasoning that the justices used to make that decision can and should apply to the numerous state laws that require ultrasounds before a woman can get an abortion.

And let’s remember just how intrusive and unnecessary these invasive procedures are. A state-mandated ultrasound less than 12 weeks into a pregnancy (when 91 percent of abortions take place) most often requires a transvaginal probe. That’s a still-not-very-nice way of saying something truly twisted–before allowing you to exercise your constitutional right to control over your own body, the state wants to shove something into you, for no medical reason whatsoever. So much for that control.

Oh, and it doesn’t matter if the reason that you’re seeking this abortion is that you were raped–the state would like to do that again, thank you very much. There’s a reason that transvaginal ultrasounds are called “rape by the state.”

Beyond that, because the state-mandated ultrasounds are blatantly medically unnecessary, few if any insurance carriers will pick up the cost. So poor women who need an abortion are even more at a disadvantage. And disadvantaged women are what the anti-abortion vultures feed on–those shady Crisis Pregnancy Centers offer women free ultrasounds. Of course, the real reason is to shame and browbeat a woman into not having an abortion. But that doesn’t stop many states from directing women who need the free ultrasound to these charlatans.

The bottom line is that these mandatory ultrasounds are blatantly intended to discourage women from getting an abortion. Any claim that they’re intended to protect women’s health are clearly bogus. And that’s exactly why the courts invalidated TRAP laws–and it’s a great way for abortion rights advocates to challenge ultrasound laws.