Utah Said Knock You Out 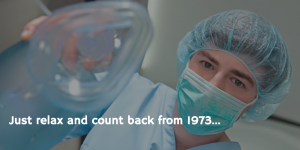 Just relax and count backwards from 1973…

Utah has just become the first state to require that doctors anesthetize fetuses for an abortion performed after 20 weeks. Utah SB234, signed into law on March 28, is the twisted brainchild of Utah Senator Curt Bramble. It says that “substantial medical evidence from studies concludes that an unborn child who is at least 20 weeks gestational age may be capable of experiencing pain during an abortion procedure.”

File that “substantial medical evidence” with climate change denial, a 5,000 year-old earth, and the belief that cavemen kept dinosaurs as housepets. The medical community is virtually unanimous in the consensus that fetuses cannot feel pain before 28 weeks.

The truth is that Sen. Curt Bramble was trying to get a full ban on abortion after 20 weeks. After being told that would probably be deemed unconstitutional, Bramble decided that the next best thing would be to require women to undergo an unnecessary and potentially dangerous procedure during what should be a routine operation.

That’s because to anesthetize the fetus, you have to anesthetize the woman by knocking her out or using a heavy dose of narcotics, neither of which are necessary or desirable. The American Society of Anesthesiologists says that side effects of anesthesia include nausea, confusion, chills, and on rare occasions delirium or long-term memory loss. As David Turok of the University of Utah's obstetrics and gynecology department told Mother Jones, “You never give those medicines if you don't have to.”

In fact, the law in Utah previously required doctors to inform women of the “potential medical risks to a pregnant woman that are associated with the administration of an anesthetic or analgesic.” But under the new law, doctors have to tell women the scientifically unsupportable quackery about fetal pain–and then unnecessarily sedating the patient without informing them about the risks.

Congratulations Curt Bramble and Utah–you may not have been able to ban abortion, but you certainly managed to make it unnecessarily risky.