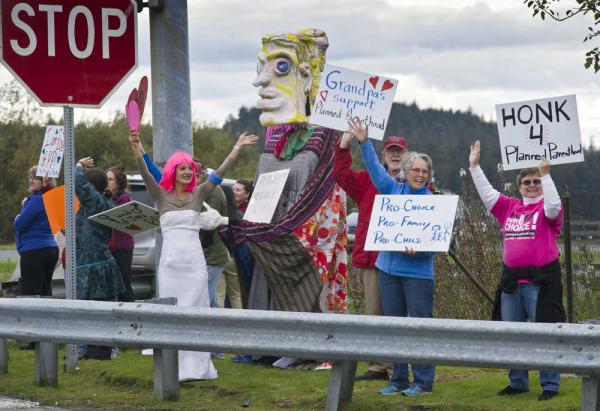 Guest Post by one of our Alaskan LPJ Leaguers, journalist and activist Shannyn Moore

Today, the Alaska Supreme Court found unconstitutional a law requiring physicians to notify a parent, guardian, or custodian of a minor seeking an abortion.  Today’s decision comes less than a month after the U.S. Supreme Court issued its historic ruling in Whole Woman’s Health v Hellerstedt–the most significant abortion-related ruling from the Court in more than two decades.

“Today’s decision provides important protection to the safety and well-being of young women who need to end a pregnancy,” said Janet Crepps, senior counsel at the Center for Reproductive Rights. “The reality is that some young women face desperate circumstances and potentially violent consequences if they are forced to bring their parents into their reproductive health decisions. This law would have deprived these vulnerable women of their constitutional rights and put them at risk of serious harm.”

“We applaud the court for ruling to protect the health and safety of young women in Alaska,” said Christine Charbonneau, CEO of Planned Parenthood of the Great Northwest and the Hawaiian Islands. “We all want teens to be safe–and the sad truth is that some teens live in dangerous homes and can’t go to their parents. This law would prevent some of Alaska’s most vulnerable teens from accessing safe medical care.”

“A young woman seeking an abortion doesn’t need additional hurdles. She needs a doctor,” said Joshua A. Decker, executive director of the ACLU of Alaska. “We have a responsibility to keep our daughters safe, and this law doesn’t do that. Healthy families don’t need government mandates to communicate. Instead, young women from families in crisis and young women in fear need safe, prompt, confidential health care, free of government-imposed restrictions.”

The evidence in Alaska shows that most young women seeking an abortion involve a parent.  But some young women live in an abusive home, or a home where it would not be safe to disclose a pregnancy.  The law would have required a young woman to go through a complicated legal process to persuade a judge to allow her to have an abortion without parental involvement–forcing abortions later in pregnancy, if the young woman could access the procedure at all.

Mandatory parental involvement laws like Alaska’s are opposed by state and national medical experts, including the American Academy of Pediatrics because they do not foster healthy communication, and in fact can be very detrimental to the health and safety of young women. In fact, the American Medical Association, the American College of Obstetricians and Gynecologists, and the Society for Adolescent Medicine have all advocated for the need to protect minor’s access to confidential reproductive health services.

Known as the Papa Pilgrim Law, named after an Alaskan who claimed religious freedom to live on remote public lands and sexually abused his daughters. How would he react to notification if his daughter would have sought an abortion?