We Got Mad Beef with Trinity Health Corporation 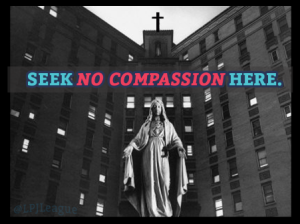 This #PlayoftheDay blogpost was written by LPJ writer and comedian, Leah Bonnema.

If a female shows up in the ER of one of the Trinity Health Corp hospitals, and the only way to save her life is to perform an abortion, they won’t do it. Seeya, wouldn’t want to be ya (women).

THC is like: Hey y’all, totally legit, we’re complying with the Ethical and Religious Directives, or ERDs of U.S. Council of Catholic Bishops, which prohibit abortions under all circumstances, even if the life of the mother is in danger.

And the ACLU is like: Nuh-uh biatches, you get Medicaid funding which means you have to follow the Emergency Medical Treatment and Active Labor Act, which states that when a patient comes in with an emergency condition, the hospital has to provide whatever treatment is necessary to stabilize said patient.

The doctors in these hospitals aren’t just holding back care, they also are holding back information. Women have been denied care and then not even told why. How many people in rural areas only have access to a Catholic hospital?! How does leaving someone afraid and in need of help align with anyone’s moral code?!?!?!?!?!?!?!

Catholic hospitals also nix birth control, sterilizations, and certain prenatal tests. WHAT YEAR ARE WE LIVING IN!?!?!?! Do they have a stake out back to burn women on as well?!