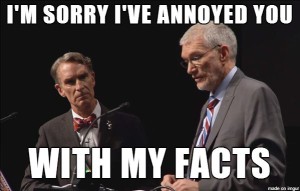 Planned Parenthood: guilty until proven innocent, and then guilty all over again because some dude can spew BS and yell loudly.

Trent Franks, R-Ariz., said in announcing the hearing, “Planned Parenthood and its executives must answer for the alleged atrocities brought to light in the videos by the Center for Medical Progress.” Of course in PP De-funder style neither group was invited to testify.

If you really are interested in expert opinions just look at Bill Nye's most recent video where he states that reproductive choices should be left up to women, the notion that life begins at conception is just bad science and that people who cling to this idea “apparently literally don’t know what you’re talking about” (Go get ‘em Bill)!

We are in your corner Cecile! Also in your corner are the facts, science, compassion, caring, smart choices, empowerment, intelligence, knowledge and lots of vaginas.