What Sex Ed is Like for Teens in Alabama

Hey LPJL, It’s Caity again! I go to a high school in a rural, backwards, underdeveloped Alabama town.  As you can imagine, things suck for pretty much anyone with an IQ over fifty. In my school, girls are not allowed to show their collarbones and we cannot wear typical athletic shorts during P.E. because it makes our forty-five-year-old, married father P.E. coach “uncomfortable.” Instead of firing him, because ew, our female principal added a new rule to the handbook.

For the school administrators, it all boils down to this: if you wear a shirt that exposes your collarbone or shoulders, boys might want to have sex with you, and that is completely your fault, and something you should be ashamed of. We also (surprise, surprise) are not taught comprehensive sex education, just abstinence-only. They believe that if we just cover up our bodies and don’t talk to anyone about sex, teens just won’t have sex, right? Too bad that’s not even remotely how life works. The little bit of “guidance” we got, as far as sex goes, is as follows: “Don’t have sex. If a woman gets drunk and is raped, it’s her fault; and men cannot be raped, but they can have their wallets stolen… or something.”

As a rape victim who was not quite open about my experiences, hearing this hurt.  It did not hurt because I believed what he was saying; it hurt because I was listening to a grown ass man say something appalling and harmful and victim-blaming to a group of fifteen-year-olds. Also, statistically, I was probably not the only rape victim in the classroom when this happened. All of this seems way too insane to be true, but these situations, and worse, are all too common here in the Deep South. I know that I am not the only person who sees how wrong this is, but I am the only one I know of who actually speaks out.

Sometimes it feels like the battle that I am fighting is a lost cause, but there is no way I could ever stop standing up for what I believe in. I am so excited to see where my guest blogging with the Lady Parts Justice League takes me. Thank you so much for all of the nice comments and encouragement! 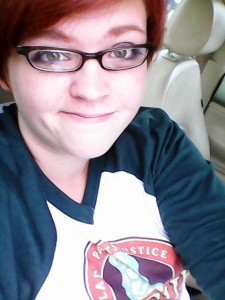 Caity in her new LPJ League shirt (available on teespring.com)!