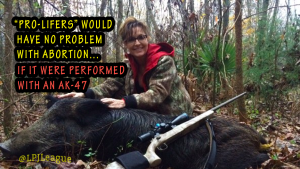 ”Bristol Palin is famously pro-life because she has a profound reverence for all pre-born living things… oh, and because she can’t seem to wrap her head around the whole “sex causes babies” thing. Bristol is a big believer in the power of abstinence, which she evidently thinks consists of telling other people to be abstinent while she’s having sex.

Now the fecund Ms. Palin is upset that her equally clueless mother is being criticized for embracing gun culture while supposedly promoting a “culture of life.” As though a culture of life can’t deify stem cells while advocating the wholesale slaughter of actual living people.

The cognitive dissonance of a culture that wants to protect the unborn while spraying everyone else with bullets is on full display in the fact that this country makes it a lot more difficult to terminate a pregnancy than to buy a gun and terminate a person.
“Pro-lifers” would undoubtedly have no problem with abortion if a way could be found to do it with an AK-47. Until that day, join with Lady Parts Justice to support access to abortion services for all women.