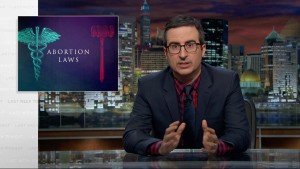 Sunday night on HBO’s Last Week Tonight, the insightful and hilarious John Oliver expertly tackled the issue of abortion in the United States of America.

He stated, “Abortion cannot just be theoretically legal, it has to be literally accessible.” He skillfully hashed out the preposterous problems we here have become quite familiar with: “undue burden,” the hypocrisy and ridiculousness of TRAP laws, how people imposing these restrictions keep saying “we are just here to protect women’s health” even though they clearly are not. He showed examples of women who are in horrible situations, highlighted how doctors are being forced to give information to patients that they do not believe, and brought this legit shitshow to light.

He closed by stating, “We thought that this was something you should know about.” We wholeheartedly agree. The crazy part of that is the notion that people STILL don’t know about it. The fact that people still think of abortion as a “women’s issue” as opposed to a human rights violation is astounding. Barring the fact that women aren’t making themselves pregnant, so this isn't happening in a penis-less vacuum, the idea that women are not allowed to make their own medical decisions should be a horror to everyone. Women are half the population. We all either know one, or are one. How do people not know?!

There is, of course, the fundamental problem that no one pays attention to an issue until a man points it out (cough, cough…Bill Cosby) and then people are like, “Oh shit – I didn’t know this was going on. I guess it must be true.”

That being said, we are very, very glad that John Oliver is tackling the issue. Bravo, Oliver, for raising awareness to this atrocity that is happening in our own country. We hope other men follow suit. Comics like Josh Healey are talking about how abortion has affected the women in their families and are making the topic of reproductive freedom a more palpable, human issue. Women’s rights are human rights and we would hope that everyone would pay attention and take it VERY personally. 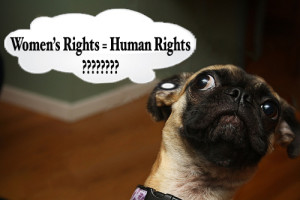