Workin’ at the Brain Wash 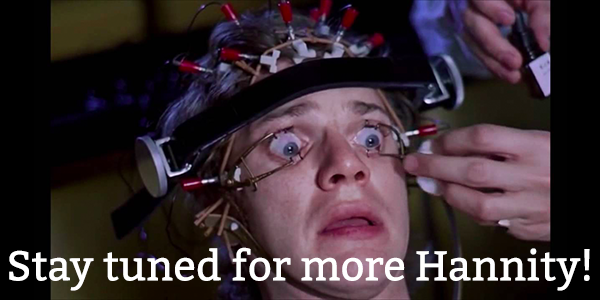 If you get most of your information about abortion from cable news, you’ll probably end up outside a clinic bellowing about baby murder into a bullhorn. That’s because–as a new study from Media Matters reveals–cable news channels function as re-education camps where rational ideas about women’s rights are systematically replaced with misogyny disguised as fetus love.

According to the 14-month study cable news actually provides more innaccurate statements about abortion than accurate ones, The study looked at Fox News, CNN, and MSNBC. In all there were 796 false statements about abortion versus only 288 true statements. Not surprisingly, the bulk of that figure is due to a heroic effort at disinformation by Fox News. They told 705 lies about abortion against only 158 factual statements. 82 percent of what Fox said was false–which is pretty close to the “a stopped clock is right twice a day” benchmark. Yes, Fox lies, but give them credit for lying consistently. In all, Fox News was responsible for a whopping 89 percent of all the false statements in the study period.

A network doesn’t post those impressive figures for misinformation without some sterling individual achievements, and the prize for lies among Fox shows goes to “Hannity.” Out of 272 statements on abortion on the Hannity show, 243 were wrong–a figure just a hair under 90 percent! Sean Hannity lies so much that I’m not sure that’s really his name.

Also, most of those who appear as cable news hosts, correspondents, or guests are anti-abortion rights. During the study period there were appearances by 70 anti-abortion speakers on Fox News versus only 5 who could be called pro-abortion. And my guess is that those 5 ended up getting shouted down pretty consistently.
But it’s important to keep speaking the truth. Despite the inundation, a majority of Americans still support abortion rights, and support has actually increased in the past year. So it just goes to prove that you can only fool all of the people some of the time…and the only ones you can fool all of the time are those that are watching Hannity.