After 20 punts the Supreme Court has agreed to take on the Mississippi abortion case that could overturn Roe v. Wade and end legal abortion as we know it.

Trump’s 6-3 Supreme Court announced today that it’s taking a Mississippi case that bans abortion after 15 weeks. If they rule it constitutional, Roe v. Wade is dead and so is the federal constitutional right to an abortion. 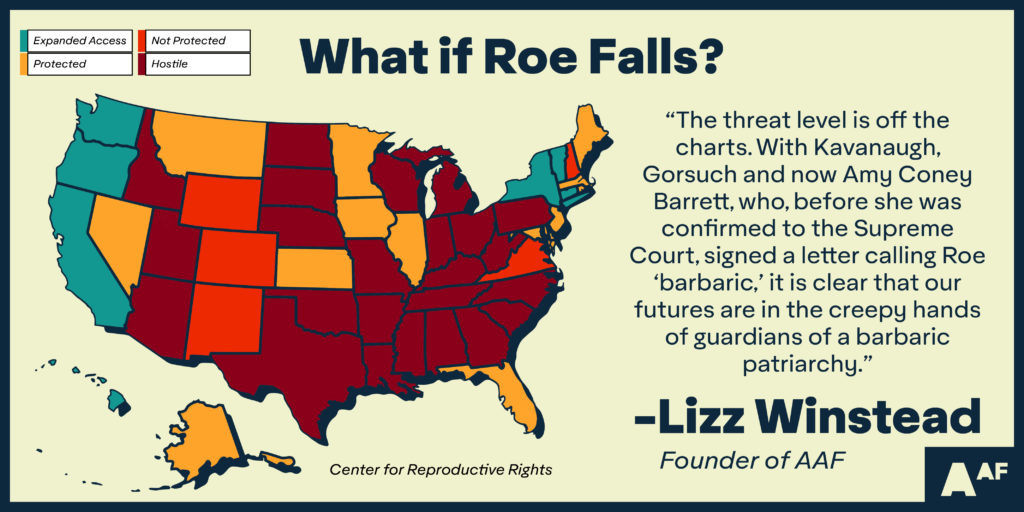 Trump set up a lower court system and a Supreme Court hostile to abortion, so extremist legislatures have taken advantage of that by feverishly passing “trigger bans,” AKA laws that say the second Roe is overturned, abortion instantly becomes illegal. Ten states already have these bans. How many other states will now rush to pass their own trigger bans, making it impossible for the most vulnerable to access care?

AAF has been sounding the alarm as we have watched state legislatures do this for years, passing laws that immediately ban abortion if Roe is overturned. And we’re terrified that with the help of Trump’s courts, they’re set up just perfectly to steamroll abortion access throughout the US.

Activists on the ground in Mississippi explain it this way. Kim Gibson from WeEngage/Pinkhouse Defenders said, “Mississippi has a trigger ban, so if Roe falls, abortion is illegal here in MS within 24 hours.”

Lori Bertram Roberts from the Yellowhammer Fund added, “No matter what the Supreme Court decides in the summer of 2022 regarding Roe, abortion will always remain a human right – even if it is no longer a constitutional one.”

Lizz Winstead, Abortion Access Front founder, looks at the realities of this Court’s predilection for destroying bodily autonomy. “The threat level is off the charts. With Kavanaugh, Gorsuch and now Amy Coney Barrett, who, before she was confirmed to the Supreme Court, signed a letter calling Roe ‘barbaric,’ it is clear that our futures are in the creepy hands of guardians of a barbaric patriarchy.”

Regardless of what happens, Winstead summed up the state of play, saying that “If SCOTUS doesn’t let Mississippi win this time, there’s another shitty state law just waiting in the wings to give the judges another opportunity.”

DECEMBER CRAFTIVISM! Need a cozy craft to warm the

Since the fall of Roe, there's been a dramatic upt