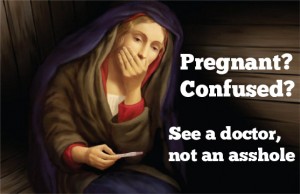 As part of their quest to put abortion clinics out of business, abortion foes have blanketed the country with fake women’s healthcare centers known as “crisis pregnancy centers” or CPCs. These black holes of disinformation look enough like actual clinics that they entice pregnant and confused women in with free pregnancy tests. But that is where anything close to resembling an actual clinic ends. At this point, fake counselors subject them to a barrage of lies and recrimination designed to trick them into thinking they have no option other than to function as breeding stock.

Now, understand this: there are actually 3 of these bogus clinics for every 1 real, licensed abortion clinic. It’s as if, for every licensed investment counsellor, there were 3 “psychics” ready to remove the “curse” on your cash if you just hand it over to them.

You could think of CPC’s as being like those knock-off designer handbags that are sold from folding tables on the street. But at least that phony Louis Vuitton bag functions as a purse for a while. These “counselling” centers function as the very opposite of a place to obtain useful information.

California is the first state to pass a law to curb the worst abuses of these counterfeit clinics. The Reproductive FACT Act requires CPC’s to give patients accurate information about abortion and birth control. Oh, and if the CPC doesn’t have a medical license, they have to reveal that.

Sounds like a path to victory, right? Well, hold on. These people have zero track record of obeying the law so why would this law be different? The raison d’etre of these fraudsters is to bury the facts, so they’re fighting the FACT act with their arsenal of assholery. They’ve filed multiple lawsuits claiming the law violates their religious freedoms and their freedom of speech–as though free speech includes passing yourself off as a medical professional when you’re just a fraud with an agenda.

And since they’re actually extremely good at lies and obfuscation, the CPCs and their cadre of right-wing lawyers have done an excellent job of stymying the FACT Act by overwhelming cash-strapped local enforcement officials with costly legal challenges.

In what NARAL correctly calls “an egregious act of legal bullying,” powerful and well-funded anti-choice organizations are socking local authorities with costly lawsuits over the FACT Act and then offering to remove them as defendants if they agree not to enforce the Act. Essentially, they’re strong-arming local law enforcement into ignoring the law.

While anti-choice forces flaunt the law, polls show 80% of Californians support the Fact Act, and thousands of them are signing petitions to encourage wavering local authorities not to submit to anti-choice legal extortion.