#DearDebbie, Does This Look Complacent To You? 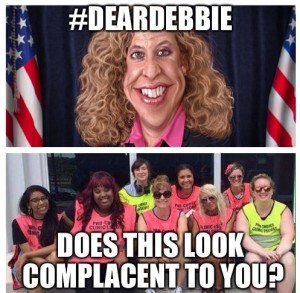 Debbie Wasserman Schultz is the head of the Democratic National Committee. She feels that she sees “a complacency among the generation of young women whose entire lives have been lived after Roe v. Wade was decided.”

Lady Parts Justice League wouldn’t exist without enthusiasm and a strong sense of urgency from millennial women. The people we encounter wouldn’t give a damn about reproductive rights if they were complacent. That was an ugly, uneducated blanket statement from someone who is wildly out of touch.