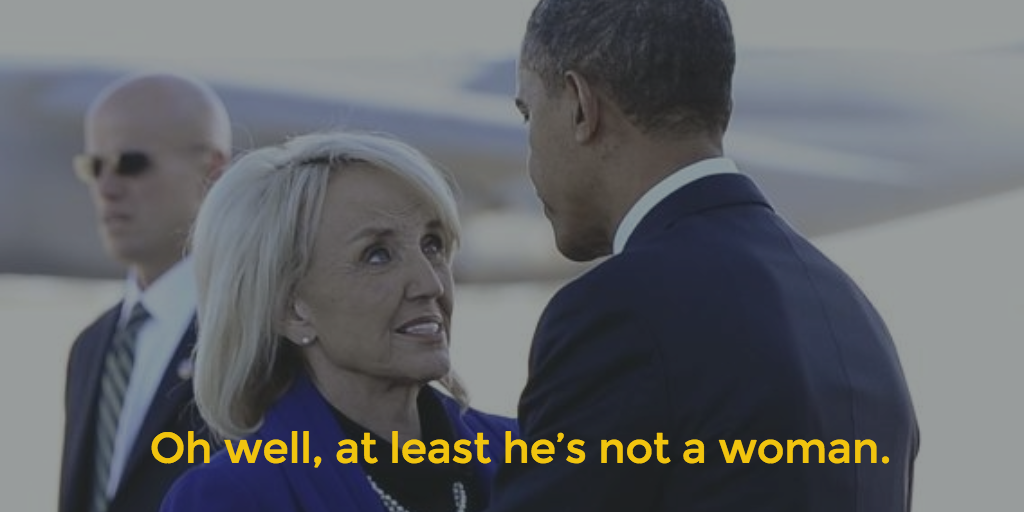 Former Arizona Governor Jan Brewer thinks we have too many women in politics. Wow. Well Jan, I can think of one female politician who might want to think about hanging it up.

Appearing on CNN, Brewer was asked if she thought Donald Trump needed to pick a female running mate because of his terrible poll numbers with women. The former Gov responded “I don’t necessarily think you need to pick a woman. You know, this woman thing has gotten way out of control I believe.”

Just how “out of control” has “this woman thing” gotten? Despite making up slightly over half of the population of this country, women make up fewer than 20 percent of the members of the US Congress–and that’s still the highest percentage of female members in history. At last count there have been 44 Presidents of the United States, and the percentage who were women is 0%… roughly.

On the state level, women make up less than 25% of statewide elected officials in both the executive and legislative branches. And they make up fewer than 20% of mayors of cities larger than 30,000. In no category do women even get to 25%, which would still be only half of their percentage of the population. Out of control!

Of course gender doesn’t determine a person’s fitness for office. Brewer makes an excellent point when she says that a woman can be absolutely disastrous in elected office. Well OK, Jan didn’t so much say that as she demonstrated that with her own political career. Brewer’s time as Governor of Arizona was marked by anti-immigrant, anti-choice, and  anti-LGBT measures, embarrassing airport tarmac confrontations with President Obama, and weird tales of headless bodies in the desert.

If there is an argument to be made against having women in elected office, Jan Brewer’s resume is it.