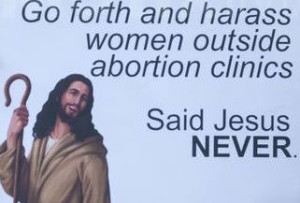 Anti-abortion protesters are so ridiculous, that it rarely ever crosses our mind that they can do anything that surprises us. I mean, they literally make a hobby out of harassing women so how could they possibly be worse? Well, they did it! At Red River Women’s Clinic, North Dakota’s only abortion clinic, anti-abortion protesters are feeling SOME TYPE OF WAY because of a counter-protester who is showing up to mock them. Wait, you think it’s OK to try to intimidate women who are seeking medical care but your feelings are hurt because someone is making fun of you??? People, we really cannot right now. You probably think that’s bad enough.

But wait. There is more.

Bartholomew Schumacher, one of the anti-abortion protesters who has complained, claims that the counter protester has the wrong idea. According to him, “He just kept saying we’re oppressive white men who want to control women’s lives and stuff. I don’t want that. I just want protection of the innocent.” Which is obviously a bullshit statement, but it’s made exponentially worse when you learn that Schumacher is A CONVICTED SEX OFFENDER.

So to sum up this ironic fuckfest:

For the record, Red River Women's Clinic has said that they would prefer no protesters outside the clinic at all. But you know what they would appreciate? More likes on their Facebook page!

And if you’d like to help the women of North Dakota, donate to the abortion fund here: