David Daleiden is the dick whose so-called “Center for Medical Progress” used illegally obtained and doctored videos to spread lies about Planned Parenthood and fetal tissue research is baaaaack.

And before he invades your uterus again, he’d like to rifle through your personal information, thankyouverymuch. Yep, his latest stunt is trying to intimidate hundreds of researchers and employees at the University of Washington’s Birth Defects Research Laboratory by using public-records requests to obtain personal information on them. Employees sued to have their personal info redacted from any records that Daleiden obtains. A judge issued a temporary injunction against releasing the personal information, but now an appeals court has sent it back to the judge as too broad. Here’s hoping these people aren’t exposed to the threats and harassment that are stock-in-trade for anti-choice zealots.

For-profit companies put on their best Church outfit to screw women over.

Unholy Rollers: Suddenly businesses with “moral objections” to birth control are coming out of the woodwork—and into your uterus! Thanks to the whining of anti-abortion types, the Affordable Care Act allows religious employers to deny their employees the otherwise mandatory Obamacare birth control coverage. So what’s that—a few non-profits, some nunneries, and those assholes at Hobby Lobby? WRONG! 24 of the 45 companies that have asked for the religious exemption are FOR PROFIT enterprises. And paying for your IUD eats into their profits! So does, oh USING YOUR INSURANCE COVERAGE, FOR EVERY OTHER HEALTH NEED.

Ugh. The very foundation of Repro rights was created to get access to birth control—and this religious exemption shit undermines both! The problem begins with the bat-crap religious exemption in the first place. Once religious-affiliated employers were allowed into your vagina, they opened your floodgates to everybody!

Christmas in August?! No co-pay for BC and abortion in every stocking in Oregon

GO BEAVERS! Governor Kate Brown of OREGON just signed this country’s most progressive reproductive health care policy. Get this, Oregon—the Reproductive Health Equity Act mandates that insurers cover birth control and abortion care with no co-pay, provides post-partum care for low-income women, and provides funds for reproductive care for noncitizens excluded from Medicaid. And it does it at a time when the Trump administration is trying to roll back access to abortion and birth control, and states like Texas are going hog wild with anti-abortion legislative lunacy. So thanks more than ever, Oregon! What’s the old saying—every time a Texas closes, an Oregon opens up? Something like that.

And just how closed is TEXAS? It’s in fucking lock-down. Even though the horrific House Bill 2 was overturned by the Supreme Court, during the time it was in effect half of the abortion clinics in Texas were forced to close—and reopening any is a daunting task. That’s why women who need abortion care routinely have to travel up to 150 miles on a bus—a four hour trip—to get the care they need. And thanks to Texas’s 24-hour waiting period, they have to do it more than once. This photo essay includes the story of one such woman, along with other people on both sides. It ain’t a pretty picture.

But here’s the ugliest picture you’re going to see in a while—straight from deep in the heart of Texas. It’s three old white guys, including Texas Governor Greg Abbott, with big old skull-fuck grins to celebrate the passage of an anti-abortion law so extreme it’s being called the “Rape Insurance” law. HB 214 bans insurance companies from covering abortion care, even in cases of rape, incest, or fetal abnormalities. Women will be forced to try and find separate abortion coverage. Do YOU have plans for what to do after rape or incest? In Texas, you need them! And there are 10 other states with this same law. What this bill does is to stigmatize abortion care while traumatizing victims—another Texas Two-fer

The people who brought you the junk science of so-called “abortion pill reversal” have some junk accreditation to back it up. Abortion reversal refers to an unproved method of “reversing” a medication abortion after the first pill of the two-pill process has already been taken. The medical establishment rejects the phony science behind these claims. But anti-choice fraudsters Heartbeat International and National Institutes of Family and Life Advocates are trumpeting that they got “the blessing” of the California Board of Registered Nursing for their classes on this abortion reversal garbage. In truth, the CBRN does not approve class material. It does approve nursing continuing-education providers. And that involves a 6-page application which relies on the education providers to make sure the class material obeys rules that the material be “related to the scientific knowledge and/or technical skills required for the practice of nursing…” Gee, I wonder how strictly they vetted their own propaganda?

Thanks to the online reproductive rights #resistance squad (psst: THAT’S YOU! ????), Molly’s review of this fake clinic in North Carolina went from having only 2 misleading Google reviews to a growing number of FACTUAL reviews and upvotes! U(terus) can make a difference! #ExposeFakeClinics so people all over the country get the facts when searching for abortion care. Now let’s help the folks in Rochester by upvoting Rashe’s review (or calling writing an accurate review of your own!) 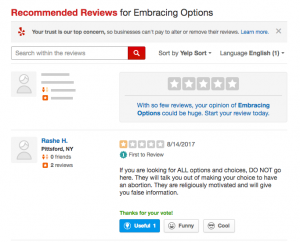