Anti-Choice Daleiden Has to Pay Up For His Lawbreaking Lies

Just fine: David Daleiden, the turd behind the stolen and manipulated “undercover” videos about “baby parts” has been told by a judge to cough up $195,000 in fines and sanctions for continuing to spread lies. Daleiden released the videos through his criminal enterprise called the Center for Medical Progress (CMP.) Several years ago Daleiden and CPM set off a round of anti-Planned Parenthood hysteria when they illegally recorded and deceptively edited tapes making it look like attendees at a conference of abortion providers were discussing selling fetal tissue. A federal judge ordered Daleiden not to release any more tapes, but he violated the order. Now Daleiden, CMP, and his lawyers are jointly on the hook for $195,359 in fines, sanctions, and legal fees. It’s nothing compared to the cost of the damage they’ve caused, but it’s good to see some justice in this case.

Nobody Puts Kentucky’s Last Remaining Abortion Clinic in a Corner, Except Kentucky

It’s crunch time in KENTUCKY, which is trying to avoid becoming the first state without any abortion clinic at all. This Wednesday a legal showdown begins in a federal courtroom over the State of Kentucky trying to shut down EMW Women’s Surgical Center—Kentucky’s last abortion provider—over a law required clinics to have “admitting privileges” at a local hospital. It’s the type of law that’s designed to shut clinics down, and that the Supreme Court ruled was unconstitutional in a Supreme Court decision striking down a similar law in Texas. If the Kentucky law is overturned, it would clear the way for Planned Parenthood to open a second clinic—doubling the number in Kentucky! As the head of EMW said, your right to choice shouldn’t depend on your zip code!

Do We Need To Write a List of Why Making a List of Abortion Providers Puts Them in Danger?

Hit list: The State of SOUTH CAROLINA wants to make a list—and you can sure it will be checked twice by anti-choice lunatics, self-appointed enforcers of vigilante justice, and trouble-making kooks with an axe to grind. What kind of list? A SHITTY, UNCONSTITUTIONAL ONE. SC Gov. Henry McMaster has signed an executive order creating a public list of doctors and medical practices associated with abortion providers. The American Congress of Obstetricians and Gynecologists is telling the governor that list “would be an invitation for intimidation, threats, and even violence.” There are enough crazy people out there looking for trouble without the state of South Carolina providing them with a road map!

And what happens when your STATE ATTORNEY GENERAL CANDIDATE promotes these dangerous lists? CUE ALABAMA

And this case in ALABAMA shows what happens when information about abortion providers falls into dangerous hands. And these hands belong to a candidate for Alabama Attorney General! Candidate Sam McLure posted a picture of an abortion doctor on Facebook and said “This woman killed babies on Friday in Montgomery. Can anyone publicly defend why she should not be prosecuted for murder?” And he links to a site that gives the doctor’s address, photo, and other personal information. Some people are calling this a case of “doxing,” publishing private information. It’s also virtual invitation to violence—a tactic McLure seems to endorse. He publicly called for a “2nd Amendment militia” to “prevent a Federal officer from moving against a Pro-Life Alabama Governor who ended abortion in the State.” Alabama has seen before where this type of thing ends. And it doesn’t seem to ever end. There will never be justice for abortion doctors if the very people who are supposed to enforce the laws protecting them think that they should be tried for murder.

It’s Not Complicated, ‘National Review,’ Forced Abortions Are Not a Thing

Force & Farce. When they’re not busy posting “How-To” info packets on harassing abortion providers, anti-choice crazies are spinning lurid tales of “forced abortions.” The latest screed comes from the National Review. They’re not usually lumped in with “fringe” voices of conservatism, but now the fringe has become the mainstream in conservative thought–and that means that conservatives aren’t thinking anymore. Buh-buh, National Review credibility. It takes brass gonads of any gender to spout fantasy propaganda about women being coerced into abortions when your favorite tactics include shouting at and shaming women who are trying to get medical care, harassing them and their doctors, and using lies, threats, and intimidation to force your twisted values and false beliefs onto others.  These fairy tales have a purpose—anti-choice forces want to a new round of TRAP laws to force abortion providers to “screen for coercion.” That is, if the patients manage to get past the gauntlet of intimidation outside the clinic.

Arbia Pregnancy Resource’s billboard says that they are “Here For You,” but they’re ACTUALLY here to MISLEAD pregnant people and push their religious agenda. Start the week off by TAKING ACTION and upvoting Lizz’s accurate review and/or writing an accurate review of your own! Let’s make sure that pregnant people in St. Paul get the facts when they’re searching for ALL of their options. 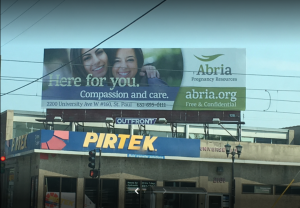 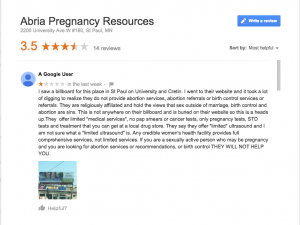