It just didn’t grab me.

Compared to the vibrant and historic Women’s March on Washington last week, the March for Life held two days later was a relatively lifeless affair. Why, it wasn’t even exciting with Mike “Partytime” Pence pumping the crowd. 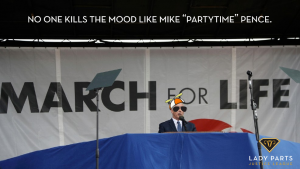 It’s not just that it was a lot smaller (the Washington, DC Metro said that ridership was typical for a normal Friday). Hell, we wouldn’t even mention size if a certain tiny-handed someone didn’t have a serious case of crowd-size envy.

And it wasn’t just that the joyful celebration of womanhood and righteous resistance of the Women’s March had been replaced by uptight angry paranoia, as pussy hats gave way to tinfoil headgear.

It was the blatant in-your-uterus hypocrisy of holding a “March for Life” endorsed by a new regime of open hostility to most non-fetal life on earth. It was a great day for zygotes, but not so much for immigrants, Muslims, LGBT people, minorities, the disabled, and–ironically enough–especially not for women.

Within hours of the “March for Life,” there was an executive order shutting the door on helpless refugees. Where were the lovers of snowflake babies then?

And another thing — these shit-sucking douche-faucets say we’re crude. There a lot of indignant outrage at the pussy-themed costumes and signs at the Women’s March. Mike Huckabee called the marchers “vulgar” and railed about women “dressing up in public as women's genitals.” Yeah, Mike — somebody should have grabbed them.

Yes, we have better marches. But right now they’ve got the political inside track. Despite the fact that 59% of Americans support abortion rights, the antis are positioned to create a Supreme Court majority to overturn Roe.
We need to organize more than marches — and Lady Parts Justice League is here to help.