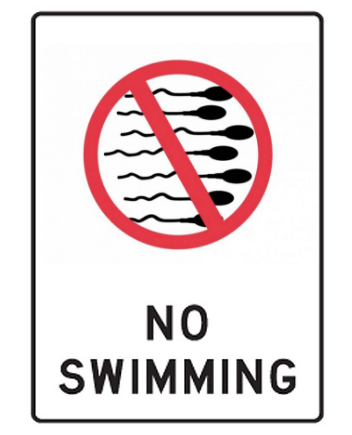 No unauthorized swimming in the gene pool! At a time when so many states are trying to occupy your lady parts, the state of Maryland has taken historic steps to empower you to prevent any and all unwanted visitors to your egg section.

The newly passed Maryland Contraceptive Act provides the most comprehensive coverage of contraception in the country. The bill provides everything you could want for preventing what you don’t want:

The bill gives Maryland several more “firsts” to add to being the first state to ban police profiling, fracking, and bee-killing pesticides. Now Maryland is the first state to require full coverage of morning-after pills at the point of purchase, and the first to ban co-pays for vasectomies.

And this bill had overwhelming bipartisan support. Republican Governor Larry Hogan signed it, party leaders in both Houses supported it, and fully half of the state’s lawmakers co-sponsored it. The lawmakers of Maryland seem to get the idea that preventing unwanted pregnancies is a damned efficient way to reduce the number of abortions. It sure works better than other states that try to prevent abortion with abstinence, unnecessary TRAP laws, and lots of yelling.

Oh, and it will accomplish all that while saving money. The immediate costs of such things as providing 6-months of birth control at a time will go up, but that will be more than off-set with the long-term prevention of unwanted pregnancies.
For passing common-sense legislation that benefits everyone and saves money, we name Maryland this week’s “Anti-North Carolina!”