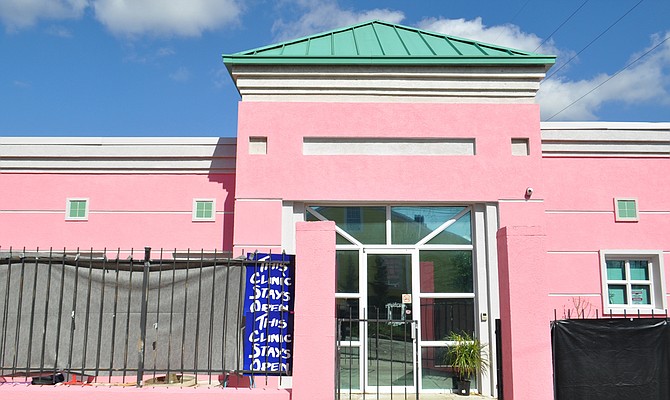 We’re grinding our teeth down to reptilian nubs here at LPJL HQ today with some terrible news about our friends in Mississippi — people we’ve broken bread, shot the shit and explored the wonders of reproductive health care with. This time, it’s personal.

Here’s the shady deal: the local police and anti-abortion protesters outside a Jackson Mississippi abortion clinic made a bizarro, backroom Hamilton/Jefferson agreement about the kinds of hateful bullshit they’re allowed to pull in their mission to terrorize and bully vulnerable women trying to receive legal medical care.

Parts of this deal include allowing protesters to hold their nasty hateful signs and speak, preach nasty hateful words to people on public sidewalks surrounding the clinic — which suck. But they ascend to a new level of fuckwaddery by requiring  the Jackson Police to pay the group Pro-Life Mississippi $2,500 and return all their confiscated signs from over the years.

Just in case you didn’t think it could get crunchier: All of this went down without the knowledge of or input from the clinic owners, the doctors or patients.

We’ve talked plenty of times before about how extremely done we are with matters of women’s health being used as bargaining chips and vital matters of women’s lives, safety and autonomy being discussed, debated and regulated without giving said women or the providers of this healthcare a seat at the table. It’s even more infuriating to see the local police validate and give credence to the groups that regularly use vitriolic rhetoric to harass women and prioritize their goals over the safety and well-being of those women.

Just because it’s not a surprising development, doesn’t mean it’s not outrageous — and it certainly doesn’t mean we won’t be there for our friends in any way we can. We’re tired and disparaged by years of increasingly anti-woman, anti-abortion antics and the anti-aboriton movement’s dedication to silencing the voices of the people we love and by the slimiest means.

So, hey Mississippi? Include women and abortion providers in the sequel.