A Backdrop of Violence 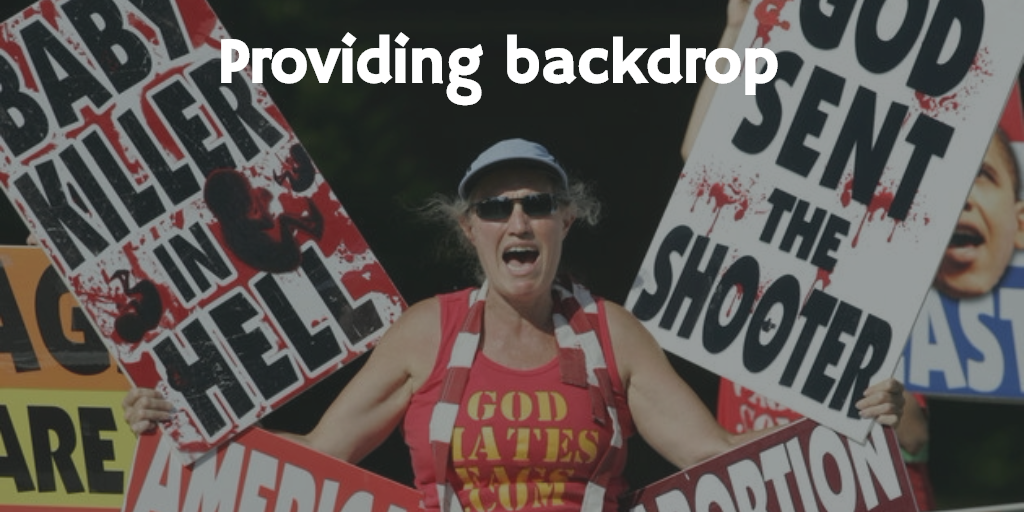 “You will know them by their fruits.” Matthew 7:16

Violence against abortion providers doesn’t just spring up out of nowhere. For every clinic firebombing, attack, or outright murder of an abortion provider, there have been years of laying groundwork and providing backdrop. It’s the dirty work that lays the foundation for the bloody work of the killers. And it’s accomplished by people who are careful to keep their hands clean.

That “backdrop of violence” is described by David S. Cohen and Krysten Connon in their book “Living in the Crosshairs: The Untold Stories of Anti-Abortion Terrorism.”  It chronicles the systematic harassment of abortion clinics across the country, from the low-level, incessant attacks that create a climate of fear and intimidation, to the sudden and murderous outbursts that they lead to.

Cohen recently gave a book reading in Wichita, Kansas–the city where Dr. George Tiller was murdered in 2009, and where Tiller’s former employee Julie Burkhart, courageously operates the South Wind Women’s Center at the site of Dr. Tiller’s former practice. Cohen gave an interview to Right Wing Watch in which he explained how the intimidation works:

“But in this world, given that 11 people have been murdered since 1993, including someone murdered at their home, with Dr. Barnett Slepian in 1998, and someone murdered at their church, with Dr. [George] Tiller in 2009, I think that all of the lower-level harassment that happens takes place against that backdrop and sends the message that ‘you should fear for your safety because maybe people like me who stand in front of the clinic on a Saturday morning or whatever day aren’t going to be the ones to murder you, but our message is going to get across to someone who is crazy enough to do that.’”

Fortunately, women’s clinics across the country are staffed by HEROES. And the vast majority of them find the courage to stand up to the intimidation. Cohen said  “I think it works more in preventing people from going into the field than getting people to leave the field once they’re in it.”

At Lady Parts Justice, we’re committed to providing support and solace to besieged clinic workers with clinic visits, counter-protests, and simple acts like providing clinic staff with a night of entertainment or organizing postcard campaigns to let them know that their work is appreciated.

There shouldn’t be battlelines when it comes to providing women’s health, but there are. And these are the people on the frontlines.