The Women’s Movement: No Shirt, No Shoes, No Cleta Mitchell

LPJL brings a special “Play of the Day” from the couch of Lizz Winstead!

I just read an article in The New York Times called, “No Room for Dissent in Women's Movement Today”

Ugh. Now we can add The Times to the list of publications that have pushed the exhausted anti-choice trope, “I used to work in the women’s movement until I got comfortable, and now I blame feminism and abortion to justify my decision to check out after I Got Mine.”

To read an old chestnut like this in the NYT is doubly disheartening. To see the Times publish this sad trombone of a premise, without an original angle IS BAD ENOUGH. Worse than that, it is written by a second-wave feminist turned conservative D.C. Lawyer Cleta Mitchell – who conveniently avoids disclosing that 25 years ago, she chose to reinvent herself, becoming an extremist culture warrior who fights tirelessly against the rights of LGBTQ people, women and families. This piece reads like a diary entry about why her sexist and homophobic positions have not been welcomed with a big group hug by… well…women.

I couldn’t let her hypocritical missive go unchecked, so I decided to dissect her piece, section by section, to compare how her choice to start working against the women’s movement, might have something to do with her alienation from it.

Let’s start with answering the questions she poses in her very first sentence.

We all know we still have no ERA, and abortion access is in the worst state it has been since Roe, and yet she weirdly goes on to claim women have it all. But the last line in this section will have you jabbing your equality fork into your eyes.

“Women got into the professions and the C-suites and the schools and the TV news anchor desks. We got there. We ARE there. “

Where- exactly– are we? Let this photo from last month’s Senate discussion of women’s health care serve as the cherry on her “We ARE there” cake. 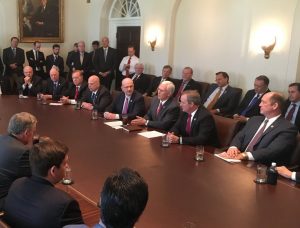 Ma’am. Just because women have made strides, we are far from “there.” In fact, this article lays out some easily Google-able facts that diminish her “We practically live in a matriarchy now!!!” assessment of America.

I can only conclude that Cleta is confusing, “no room for dissent” with “no room for pretending the strides women have made on the whole mean equality, especially with the alarming lack of women of color in C-Suites and boardrooms.”

And let’s just talk about the  “… and TV news anchor desks” line for a sec.

Yeah, that “equality” worked out well this year for all the Fox News “We ARE theres” who filed their House of Horrors class action lawsuit.

It’s extra jarring that she mentions the TV anchors then in THE VERY NEXT LINE, snarkily asks,

“So why, pray tell, were those women and girls wearing those ridiculous hats at the purposeless “women’s marches” in January?”

Cleta conveniently forgets those “ridiculous hats” were a response to the disgusting remarks made by then candidate Trump about women WORKING THOSE TV DESKS.  It was comments about a TV anchor, “bleeding from her wherever” and the disgusting statement made to Billy Bush, ON HIS WAY TO MEET A WOMAN REPORTER, declaring he has and will continue to grab the pussy of any woman he wants.

You see Cleta, getting there is a step, being respected while you are there is equality.

And just as an overall point, if you are going to write an article that complains how an entire women's movement is not accepting you, shitting on the millions of people in the movement with snarky rhetorical questions will not endear yourself to them.

Also, there were tons of pussy hat dissent – just FYI.

So, after reading this part, I assess that Cleta’s “No room for dissent” argument, seems to be frustration that there is, “no room for disingenuous rhetoric or sexual assault.”

After all of this, comes a brief bitching about millennial women, (I find millennial-bashing usually comes from women who are white and over 40, who rather than help millennials overcome modern day obstacles, have experienced disinterest by millennials when trying to cram their priorities down their throats), but I digress.

“All that a “movement” could responsibly achieve, has been achieved.”

That’s a wrap laaaadiies! Some women go to Harvard and run companies now, so this battle is won.

How can you say we have achieved all we can achieve when 35 percent of single women with families live at the poverty line?

Yeah, Cleta is right about one thing- the women’s movement I belong to, has “No room for dissent” when it comes to thinking a third of families living in poverty constitutes, “All that a “movement”’ could responsibly achieve, has been achieved.

Not only is that laughable, it is shameful, which brings us to the real REASON SHE WROTE THIS PIECE.

“The ugly truth is that the women’s movement has morphed into a giant abortion-rights lobby, demanding abortion far beyond the Roe v. Wade trimester construct.”

I wish. We actually need an even bigger focus on abortion rights because politicians all over the country are peddling the same garbage science she pushes in the next sentence.

“For someone like me, who has done a lot of soul-searching over the years, ultimately coming to believe that life begins at conception, I’m no longer welcome in the women’s movement.”

Medical choices for anyone other than YOURSELF are not found in YOUR “soul,” they are found in scientific research. Please search there for the rest of us.

“Conception” is not a medical term, it is a religious one. It also leaves out a crucial SCIENTIFIC FACT, that your “conception” i.e. fertilized egg, needs 72 hours to implant itself into the uterus. THAT is a pregnancy. Here are actual facts about how pregnancy works in cartoon form, with a lesbian birth control pill singing about it. I think you’ll find it helpful. Wait, you’ll probably deny it rights, but maybe you’ll enjoy the football analogy. Go Sooners!

“Being a feminist in 2017 equals zero tolerance for pro-life views.”

Wrong. You can totally have those views and be a feminist, but you can’t be a feminist and actively promote legislation or fake science that would erode other women’s access to full autonomy.

Doesn’t lying get tiring? Guess not.

Speaking of lying, I assume the NYT has fact checkers, so this sheer volume of inaccuracies that are just lounging around on floaties all over the page was really infuriating. But then my annoyance turned to full blown rage when I started reading an AK-47 spray of feminist blaming for the horrors of Kermit Gosnell, the hideous monster who preyed upon pregnant women who needed an abortion and had no safe, affordable place to turn.

“Feminists did not spread the word about Dr. Gosnell or demand investigations to ensure his evil wasn’t being practiced elsewhere.”

This is the most volatile statement of the article. To promote the idea that all abortion providers and activists stood by without reporting Gosnell to authorities is about as disingenuous as it gets. To even compare the kind-hearted providers and the clinics they run (and I have visited nearly 100 of them) to the monster that is Gosnell, shows that Cleta is more interested in a dishonest promotion of her agenda than ever having “dissenting views” on abortion. Kermit Gosnell is a murderer who was allowed to exist because extremists created more and more abortion restrictions. As safe abortion became less accessible, it created a climate for a vulture like Gosnell to prey upon vulnerable people desperate for abortion services.

IMPORTANT REMINDER: You cannot legislate abortion away, you only create horrifying circumstances that put women’s lives in danger.

Trial transcripts and clinicians who had to treat Gosnell patients tell the story of reporting his atrocities over and over with no response from the state.

Cleta also conveniently leaves out of her narrative, how the anti abortion extremists ignored Gosnell and instead, used him as a political football rather than showing concern for the women and babies who died. Let’s be clear-  because of the anti choice movements' dangerous laws and scary tactics, women were driven from safe providers to Gosnell.

And as far as the accusation about the lack of media coverage of Gosnell vs coverage of Todd Akin and his science-free claims that women have special powers to deactivate rape sperm, you claimed,

“Such is the double standard from the abortion-rights mainstream media.” you just chose to omit ONE VERY IMPORTANT FACT- NO ONE was covering it.

Wow this women’s movement is just a caldron of intolerance. It’s just astounding to Cleta, that there is zero tolerance for “dissenting views” like omitting and promoting hateful rhetoric and then creating a false narrative around it that blames feminism. Feminism is just the worst! We won’t let a single gay-hating, gun purist who wants politicians to decide how many babies we’ll have into our club. And she has an example:

The “feminist club” tolerates no such independent views. In fact, there’s a special feminist seething against such women who rise to public prominence. Think Kellyanne Conway.

Ok. What I “think” is why da fuq would a legitimate woman’s movement, support the views of Kellyanne Conway, former spokesperson for aforementioned legitimate creep TODD AKIN, who promoted legitimate rape. Plus there was her whole “Barack Obama is secretly recording people from their microwaves” thing that seemed kinda sketch.

And what good rant against modern feminism would be complete without the some made-up transphobic bathroom hysteria?

“The vestiges of a once proud women’s movement have deteriorated into a new politically correct tyranny where women are subjected to the presence of men in places that should be safe and should protect women’s privacy, like restrooms, all in the name of “equality.””

Honey, transgender people want what we all want in a restroom- a seat that isn’t covered with pee and to never make eye contact with the likes of you.

So to finish, she ties it all into one big hypocrisy bow,

But the greatest protections against female poverty are girls’ finishing high school, getting full-time jobs and not having babies out of wedlock.

And yet you promote every single policy that would prevent all of those things from happening.

I needed to write this breakdown because Cleta has spent the last 25 years tirelessly fighting to repeal every gain, and every protection that has been made for women. At every turn in this article, the “dissenting opinions” she defends have created laws that destroy the lives of women and families.

So I for one am very happy that this women’s movement is not inclusive of beliefs that promote making the world harder for women. I am proud to prioritize abortion rights and all reproductive rights and justice issues because simply put, if your movement is really about women’s rights as human rights, an integral part, if not the very basis of it should be fighting for access to everything that gives us our full equality and humanity. And that starts with the freedom to choose who you love and when and if you want to have a family.

So three cheers for this women’s movement! It draws a line at welcoming dangerous, harmful bullshit, masked as “dissenting opinions” just because a woman spews it.