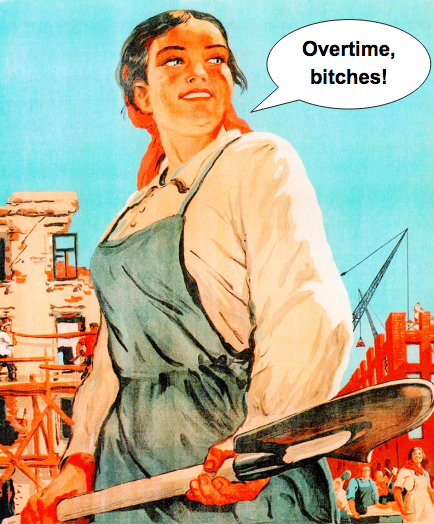 A woman’s work is never done. And it’s never, ever compensated properly. New overtime rules from the Department of Labor will go a little way toward helping to fix that.

The new rules, announced by President Obama, take effect on December 1st. They raise the cap below which workers must be eligible for overtime pay after 40 hours per week from a ridiculous $23,660 per year (a salary that is below the poverty level for a family of four!) to a more reasonable  $47,476. That, along with other provisions of the new rules, will benefit an estimated 12.5 million workers. The new rules help some 37 percent of American workers, up from only 7 percent under the present rules.

And–hello!–because those workers are among the most underpaid and mistreated in the entire economy, it stands to reason that most of them are women.

6.4 million more women will benefit from the new rules. A study from the Institute for Women’s Policy Research using an overtime cap of $50,440 determined that a third of women who don’t currently get overtime would qualify for it under that figure, which is only slightly higher than the $47,476 eventually used. On top of that, almost half of Black and Hispanic female workers will also fall under the new overtime rules.

The positive effects of equitable overtime rules on families are amazing. 44 percent of single mothers will benefit from the new rules. According to the Economic Policy Institute, an additional 4.2 million parents will become eligible for overtime, benefitting some 7.3 million children under the age of 18. The number of mothers who will be eligible for overtime will more than triple, as will the number of children who will benefit from their parents’ new status.

If those figures aren’t enough to convince you that these rules are great for families and working women, maybe this will–conservatives in Congress are dead-set against them. Rep Tom Cole (R-OK), who chairs the subcommittee that oversees the Department of Labor, is already talking about denying the Labor Department any funds to enforce the new rule.

Worker’s rights are women’s rights, and visa-versa. Properly compensating overtime is a step forward in closing the gender gap in pay. We’re all going to have to work overtime to finish the job.