THE MALE-ORDER HEALTHCARE BILL: One of the biggest reasons that the GOP “health care” bill is a sack of shit is because EVERYONE who wrote it has a hairy sack of entitled balls. And of course, a cornerstone of this bill written entirely by the aforementioned sack-havers, defunds Planned Parenthood—which we know endangers reproductive health, abortion access, and will cause MORE unplanned pregnancies. If your goal is to reduce abortions, that’s oh…. FUCKING STUPID. Two of the GOP Senators who oppose the bill as it now stands are Lisa Murkowski of Alaska, and Susan Collins of Maine. Hopefully they will flex their brass ovaries and crush this testosterone-fest of a bill.

MINOR THREAT: INDIANA legislating hasn’t gotten any less nasty since Mike Pence left. Now Indiana wants to take young people who are traumatized by an unwanted pregnancy and add a little more trauma to the mix by making it harder to get an abortion. Currently, those under 18 can ask a court to waive parental consent. A new law would require written consent, ID, and proof of the relationship between the pregnant minor and the parent or guardian to get that waiver. And it makes it a felony to tell a pregnant minor about legal abortion options in other states! Thankfully, a judge has put the law on hold… for now.

Get the (BAD!)vertising by CPCs Straight Outta San Fran!

DON’T JUST LIE THERE! A court just ruled that “Crisis Pregnancy Centers” in SAN FRANCISCO don’t have a constitutional right to lie to pregnant people! CPC’s are those phony clinics that fool people seeking an abortion into thinking they’re the real deal, and then badger them to change their mind. So being told they can’t lie pretty much undercuts the reason they exist! The CPC’s actually claimed it violated their rights to be told they couldn’t lie! But an appeals court just ruled it’s OK for SF to regulate “unprotected false or misleading commercial speech.” You would hope that being forced to stop lying will sink these suck-ass institutions, but SF CPC’s won’t take this lying down!

IRISH AYES: The pregnant people of Northern Ireland are finally free to use the National Health Service coverage they get as UK citizens to pay for abortion services… as long as they travel to England to get them. Northern Ireland bans abortion even in cases of rape, incest, and fetal abnormalities, allowing it only if the mother’s life is at risk. Those from Northern Ireland could travel to England for an abortion, but the NHS wouldn’t pay for it… until now. The British government just announced NHS will pay for abortion services for those making the journey. It ain’t perfect—but it’s a lot better than those backward countries where NO abortion services are covered under government-funded healthcare… and tons of people don’t even have health care! (Not naming names.)

UNNATURAL CHILDBIRTH: Professional shit-talkers on the right like to say that government restrictions on abortion don’t “force women to have babies.” They say: “NATURE forces women to have babies,” but what we HEAR is: “bullshit.” Nature forces people to have all kinds of things, from near-sightedness to tumors. And since we’re not the helpless cattle you seem to want us to be, we can take steps to change those circumstances—just like we can in the case of an unwanted pregnancy. That’s called SCIENCE—and we use it to understand nature. Besides, people talk about “nature’s way” when their biggest idea for preventing pregnancy is the utterly unnatural concept of abstinence! Try that with rabbits sometime.

The Vagical Mystery Tour is SOLD OUT tonight in St. Louis, MO at Blueberry Hill! 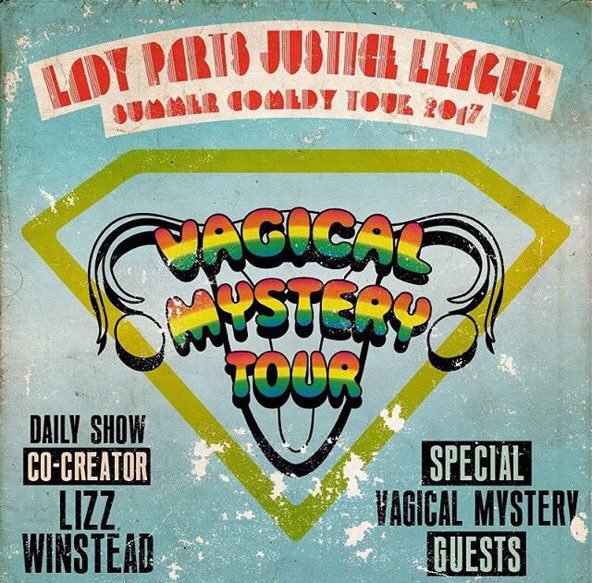