A Crazy Line for the Bathroom in Houston 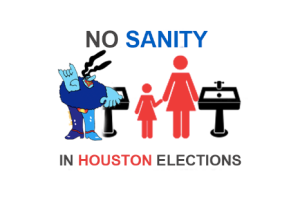 Opponents of an Equal Rights ordinance in Houston managed to repeal the measure on Election Day by somehow making the issue all about “No Men in Women’s Bathrooms.” That’s pretty much like turning a minimum wage law into a referendum on broken glass in baby food. It’s completely insane, which in the world of conservative politics means that it’s breathtakingly effective.

The people trying to repeal the HERO ordinance literally adopted the slogan “No Men in Women’s Bathrooms” and even came up with this handy stick figure diagram that illustrated the sort of Blue Predators that would menace your Red Womenfolk in a nightmare world of equal rights.

Needless to say, it worked like a charm, and now Houston has lost it’s HERO. Gay people (and many others) are subject to discrimination, and red female stick figures are free to use public restrooms without being ogled by Blue Meanies.