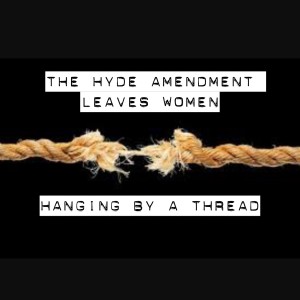 In 1973, when the Roe v. Wade ruling deemed abortion legal and constitutionally protected, anti-choice crusaders took this as a challenge. How far could they go in restricting abortions while still complying with the legal parameters set forth by Roe? This is a dangerous game and one where women always lose. One of the earliest tactics to roll back reproductive rights was the passing of the Hyde Amendment. Introduced in 1976, the Hyde Amendment prevents federal Medicaid funding from being used towards abortion. Invariably, Hyde affects low-income and marginalized women in the most devastating way. It is this population that becomes vulnerable when access to abortion is compromised due to lack of resources.

The case of Rosie Jimenez is often cited as one the first casualties of the Hyde Amendment. Jimenez, due to limited funds, was forced to seek an abortion from an unlicensed midwife rather than an OB GYN. She died shortly after due to complications caused by unsanitary conditions. Jimenez had used Medicaid for previous procedures and likely would have gone to a doctor had the procedure still been covered by Medicaid.

What these anti-abortion activist and politicians refuse to acknowledge is that restrictions on abortion don’t decrease abortion, they increase unsafe ones. Laws that limit access to safe, legal medical care actually penalize poor women and create situations where women’s lives are at risk. So these “Pro-Life” people are outraged by abortion but are OK with women dying due to illegal and unsafe procedures that are easily avoidable. So much for “Pro- All Lives.”

Members of Congress are currently trying to repeal The Hyde Amendment by passing The EACH (Equal Access to Abortion Coverage in Health Insurance) Woman Act. They aim to insure that Medicaid covers abortion procedures and that the crucial health decisions of women don't hinge on their economic status.

To find out more about the The EACH Woman Act, click here : All Above All