ANOTHER STATE OF AFFAIRS 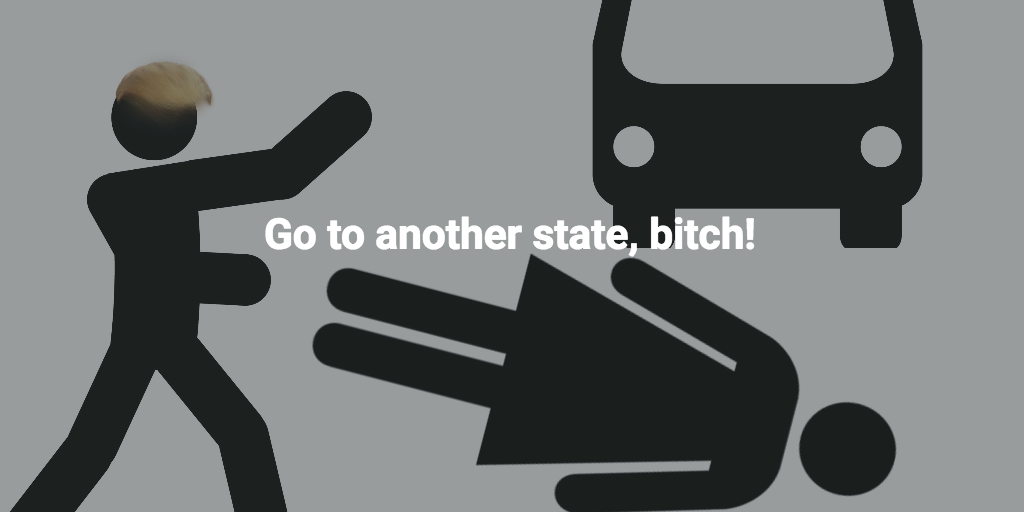 As America digs in to try and survive our coming Orange Night of the Soul, it’s important to take a long and sober look at what some 47 percent of us have gotten us into. Donald Trump is so wrong for so many reasons that, a week after his election, we’re just getting around to just how wrong he is on abortion… and we’re an abortion rights organization.

He dropped a few smelly hints during his post-election interview with 60 Minutes. Although he concedes that gay marriage is “already settled,” saying “It’s law. It was settled in the Supreme Court. I mean it’s done,” after last year’s SCOTUS decision, he doesn’t seem to believe the same thing about Roe v Wade, which was settled in 1973.

Here’s what he told 60 Minutes:

“If [Roe v. Wade] ever were overturned, it would go back to the states,” Trump said.

60 Minutes’ Leslie Stahl followed up: “But then some women won’t be able to get an abortion?”

“Yeah, well, they’ll perhaps have to go — they’ll have to go to another state,” Trump said.

Translation: WHO GIVES A F**K? Lift yourselves up by your pussies for all I care. I have a wall, er a fence to build.

So where does Donald Trump really stand on abortion rights? Over the years, he has been everything from “very pro-choice” to insisting that a woman should be punished for seeking an abortion. HERE’S THE TRUTH:

It’s obvious from Trump’s statements to 60 Minutes there that he has absolutely no idea–and absolutely no empathy–for what life is like for a vulnerable pregnant person, who can’t oh, hop on a private plane to have a destination abortion in Napa. in fact, many people can barely afford the procedure itself, never mind the daycare, time off of work and already burdensome travel costs that his anti choice advisers have put in place.

What can you expect from Trump given the anti abortion zealots he has surrounded himself with to shape his abortion policies.  His own views about abortion may be shallow, but combine his own stupidity on this issue and willingness to spew gruesome lies in order to score votes from evangelicals, he yet again sold out women to zealots like Mike Pence–a man who has built a career on trying to deny reproductive rights, including state-mandated funerals for aborted fetuses, and “advisor”  Troy Newman, who has called for the execution of abortion providers, blamed 9/11 on abortion, and been banned from the country of Australia because his anti-abortion extremism put him on Australia’s terrorist watch list. Forget what Donald Trump believes–what’s important is what Trump will do, and the best indicator of that is the type of people he surrounds himself with.

Reproductive rights aren’t rights unless they’re accessible, for EVERYONE- including poor people and people of color who cannot surmount the economic barriers that abortion opponents put in their path.

The bottom line is that Donald Trump gives two shits about abortion. Unfortunately, the corollary to that is that he gives two shits about abortion rights. He long ago decided to throw women under the bus in order to curry favor with social conservatives… and because he probably likes the idea of women under a bus. If you don’t like the view from there, stick with Lady Parts Justice League as we begin the long hard fight to take the wheel of the bus back.