Even the Bullshit Continues To Be Bigger In Texas 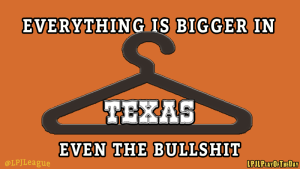 On Monday, Texas announced that it was cutting Medicaid funding to Planned Parenthood clinics after the premiere and whirlwind GOP tour of the undercover* (*see fake) PP videos which featured** ( **See edited and out of context) discussions about fetal tissue.

You remember — the videos that have been discredited.

You remember — the videos that have been proven to be NOT REAL.

But I guess let’s just carry on sweet soldier without the facts. As Per Usual (pronounced ‘per you-jjj')!

It is egregious that access to care like cancer screenings and birth control are being taken away because of VIDEOS PROVEN TO BE UNTRUE. It's as if (and I mean it is exactly like) the GOP is looking for an excuse to hurt women?! NOOOOOO?

One group of women who will be negatively affected will be Latina women, who comprise nearly 40% of Texas' female population. The National Latina Institute for Reproductive Health (NLIRH) has been documenting the horrific impact of these cuts and other menaces to the health and rights of Latinas and immigrant women in South Texas. NLIRH Executive Director Jessica González-Rojas said, “While this threatens all Texas women, it’s particularly harmful for Latinas, who have been among the hardest hit by recent clinic closures throughout the state.”

Are we going to decide that Transformers is a documentary and outlaw cars? Maybe if the cars were from Mexico and Central America? You know what’s a real thing, that’s been genuinely proven? Climate change. There are real documentaries on that. BUT CLEARLY WE ARE NOT WORRIED ABOUT ACTUAL GOINGS ON. Just women being ‘allowed' to take care of themselves.

Maybe we should stick some Iranian Nuclear Weapons up our cooches and finally someone will give a shit.

In the GOP’s battle march to eradicate women’s access to health services and reproductive freedom they have seriously hurt the lower and working class families of Texas. Way to go!!!!! What's that saying?! “You can't take a poor girl out of Texas but you sure can give her a shitty quality of life”?!