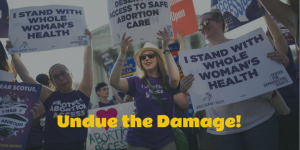 In Whole Woman’s Health v. Hellerstedt, the Court ruled on Texas’s dishonest TRAP laws–laws that are so specifically designed to shut down abortion clinics that anyone can see it. The question was whether the Supreme Court would acknowledge that reality, or just go along with the lies of the woman-haters who set these TRAPS.

And the Court ruled that those laws are a pile of wet armadillo shit! They voted 5-3 that the laws placed an unconstitutional “undue burden” on women who wanted an abortion. This ruling is a step toward undoing that undue burden.

Ever since Roe v Wade became law in 1973, anti-abortion forces have been chipping away at it. And a lot gets chipped in 43 years. Occasionally the Supreme Court has to step back in and either mitigate the damage… or let the chips fall. And you never know which way it’s going to go. This time, in the most important abortion rights ruling since 1992, the Court chose to once again uphold Roe v Wade.

The tactics taken by abortion opponents with TRAP laws like those in Texas made the patently bullshit argument that they were just protecting women’s health with the restrictions. HELLO! If you want to protect women, you don’t saddle abortion providers with bat crap rules about closet size and the types of shrubbery in the landscaping. You don’t force half the clinics in the state to close for absolutely no reason. You don’t cause the wait for an abortion in Texas to go from 4 days to 16, and as many as 23! And if you really want to protect women, you don’t pass laws that cause delays–delays that end up increasing the number of second trimester abortions by 86 percent. That causes a huge increase in the cost and difficulty of an abortion–and that’s all that these laws were really intended to do, even if it made women less safe.

Fortunately, the Court saw through that and stepped in.

While this ruling is cause for relief, it doesn’t relieve us of continuing the struggle to safeguard women’s rights from a continuous shitstorm. There are TRAP laws in other states that differ enough in details from the Texas laws that they won’t be automatically struck down by this ruling. Yes, the ruling does provide an important legal precedent in the fights to overturn those laws, but those fights still need to be waged.

And although these laws were only in effect since July of 2013, the damage they did to abortion rights in Texas will take decades to repair. The over 20 clinics that were shut down won’t be reopening soon–and many never will. Leases have been lost, equipment sold off, and most importantly, dedicated abortion providers have been forced to move on. The amount of damage to the safe abortion infrastructure in Texas is everything that the creeps who designed these laws hoped it would be.

So celebrate this ruling! We avoided major break on the legal levee that protects a woman’s Constitutional rights. But we have to remember that behind that levee there are still the constantly churning flood waters of conservative douchebaggery.