What A Friggin’ Luxury! 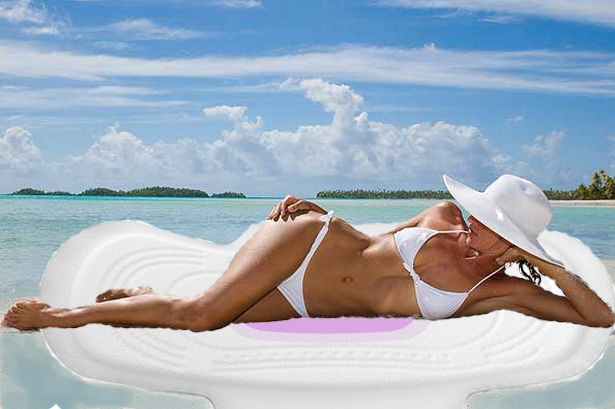 Illinois has become the third state (after Connecticut and New York) to stop charging sales tax on feminine hygiene products. Last week Rep Gov Bruce Rauner signed the bill that will take effect January 1st; so as of the new year when you go to the pharmacy to purchase your lady problem cleaner uppers, you won’t get charged a luxury tax. Women of Illinois, if you could just wait until 2017 to have your next LUXURY period, you could save yourself some cash.

This is not meant to be a general discussion about Pink Taxes (defined as “the extra amount women are charged for certain products or services”) although that is a very important conversation to have. I mean, why does a girl razor cost more than a dude razor? We’re already getting paid less, now we have to pay more for products because they are for women? Do these products have magic in them that make us cuter, more likable and easier to handle? You know, all the hallmark qualities of being a LAY-DEEEEEEEE. Shut the bloody door!

Right now I want to have a conversation about how periods have become some kind of hush hush, hacky premise, lady problem, where we get emotionally charged for discussing them AND we are getting financially charged a LUXURY tax for cleaning them up. A nice one two punch in our bloated, holding water guts. What a fucking racket. How about I just bleed on your chair? Can we talk about it then? Let’s just take the plastic off the furniture and come unclean shall we?

First off – Feminine Hygiene Products – such a great name. I take if from the moniker that these items are tasked with the arduous chore of keeping feminine areas hygienic? My shit’s clean son. Tampons and pads are catching an unfertilized egg that exits the body once a month. It’s not weird or icky. It just like, um, science. What’s the big fucking deal? Am I supposed to be embarrassed by it? I AM NOT UNCLEAN. This is 2016 the Year of Our Lord and I’m not going to a hut with my lady friends who are cycling at the same time to bleed out together.

Somehow talking about periods is considered low class or TMI or something we are only supposed to discuss in bathrooms or at lady sleepovers. Give me a break. It’s a thing that half the population goes through once a month (and if we didn’t there would not be a population to speak of) for a large part of our lives. Get over it.

We're paying a non-necessity item tax on tampons and pads and then living in world where talking about it makes us gross or uncouth?! Wow. Way to corner a girl like a bleeding animal. It seems like a genuine wool being pulled over my whispering eye conspiracy!