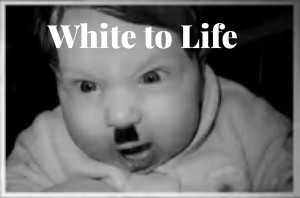 People oppose abortion for all sorts of reasons, from religious zealotry to old-fashioned misogyny to anger at the notion that somebody had sex. One reason that doesn’t get publicly aired a lot is the fear that white women having abortions will cause “white culture” to be drowned in a tide of black and brown babies.

Enter one “Paul,” who testified at a recent public hearing on a Florida bill to virtually outlaw all abortion in the state. Paul broke the unwritten rule of “don’t invoke the Master Race reason!” when he told a state House subcommittee that “white culture” would be destroyed if white women were all ““outside the home not having babies.”

So white ladies, you may think that you’re doing society a service by pursuing a career and exercising control over your reproductive life. But according to people like Paul, you are really dooming the white race by preventing the birth of the next Beethoven.. or Michael Bolton… or Vanilla Ice. Or anyone with the last name Bundy. Do your racial duty and stay as barefoot and pregnant as possible. Stick close to the trailer court.

What shouldn’t be lost in the racist haze is that the Florida bill that Paul invoked Mein Kampf to defend would outlaw any abortion except to save the life of the mother–with  punishments of up to 30 years in prison. And it passed the subcommittee by a vote of 8-3. We will always have racist ass-wipes like Paul. But if we don’t fight for our rights, we won’t always have the right to abortion.