Who Should Decide Who Gets Dignity?

Dignity Medical Center, a Catholic-affiliated hospital in Redding, California, accepts tax dollars from all you non-Catholic sinners out there, but they refuse to perform post-partum tubal ligations, a common procedure, because according to them, contraception is “intrinsically immoral.” But Dignity also runs hospitals that perform this operation, so while they don’t believe in a woman’s right to choose, they do believe in their own right to pick and choose when to be intrinsically hypocritical.

File this under:  “What Wouldn’t Jesus Do” 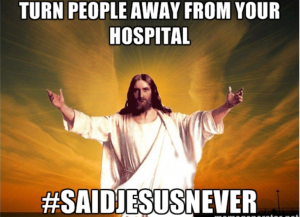